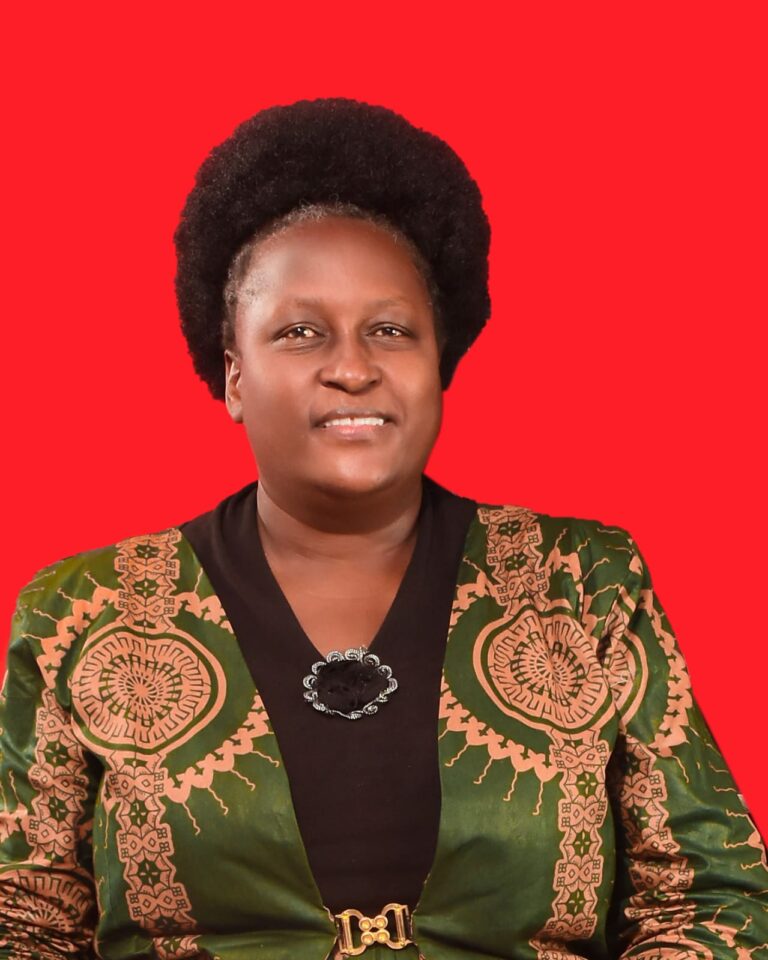 Jane Bosibori Marando Obuchi is a writer, a researcher, and a teacher. She has translated into Ekegusii language, Ngugi wa Thiong’o’s The Upright Revolution, or Why Human Beings Walk Upright. Her story, ‘Kamba Ghali’, was published in Vazi la Mhudumu, an anthology of Kiswahili Short Stories (E.A.E.P). Jane has published a novel, Latest Diary of a Kenyan (a satire), Endabasia Yechinkwana chi’Ekegusii (a dictionary of Ekegusii phrasal verbs), Chingero chi’Abagusii (CD and Booklet), and Ekegusii Nekiya, (E.A.E.P). She has translated into Ekegusii: Chinua Achebe’s Things Fall Apart; Binto Mbisebererekani, William Shakespeare’s Romeo and Juliet; Romeo na Churieti. She has published Marando the Farmer and Other Stories, a collection of Children’s short stories, which she has translated into Ekegusii, Omoremi Marando n’Emegano Ende. Her manuscripts in review for publication include include Ekegusii translations of Ngugi wa Thiongo’s I Will Marry When I Want, and The River Between.

When the White colonialists fled  Kenya, it did not take long for the ‘Black colonialists’  to take over power  and continue oppressing the masses. This play talks about the friction between two groups: the poor workers and their masters who are greedy thus not caring about the workers’ wellbeing.  It highlights such themes as, wealth, poverty, religion, marriage, societal values, and modernization as they call it. There is a clear disregard for  the ways  of  the community by those  that  have embraced the teachings of the white man, including his religion.

This war is due to the poverty of the masses which pushes the whole society into thinking of bringing about change in governance.

Things Fall Apart was written by Chinua Achebe in 1958. This is a story of  Okonkwo, a man of honour in the village of Umuofia. He developed a lot of pride in himself, a feeling that was prompted by the fear of being thought weak and lazy, like his father, Unoka.  This quality led him into committing suicide thus, he  was buried like a dog. Things fell apart for Okonkwo, they fell apart for every resident of Umuofia. In the same way, things can fall apart for anybody.

3). MARANDO THE FARMER AND OTHER STORIES

Marando The Farmer and Other Stories, a translation of Omoremi Marando n’Emegano Ende, is a collection of short stories for children. They are based on our every-day lives, ranging from the farm, wildlife, discipline, nature, etc. At the end of each story, there are questions to test the learner’s comprehension skills. The pictorial illustrations help to enhance the comprehension level of the learner thus enabling him/her to retain information for a longer period of time. This book will help the learner to be a creative thinker and writer even at an early age.

Omoremi Marando n’Emegano Ende, translated into English, Marando  The Farmer and Other Stories,  is a collection of short stories for children. They are based on our every-day lives, ranging from the farm, wildlife, discipline, nature, etc. At the end of each story, there are questions to test the learner’s comprehension skills. The pictorial illustrations help to enhance the comprehension level of the learner thus enabling him/her to retain information for a longer period of time. This book will help the learner to be a creative thinker and writer even at an early age.

Filled with love, hate, romance, and violence Romeo and Juliet, is one of Shakespeare’s  most beguiling and most human works – a story for all ages, and for all groups.  It comes out as a story that is full of desire and sweetness that leads to happiness and sorrow. This story about two lovers cursed by the ancient hatred of their families captivates the reader to read the story up to the last page. Even young readers can  now proudly enjoy this drama by Shakespeare translated into Ekegusii.

This book has pictorial illustrations which makes it even exciting to the young reader in  Ekegusii language.

This is a collection of Abagusii folk songs sung during  festivals and celebrations. Some of the songs were sung at the birth of a child, during circumcision, and others were sung for the youth, teaching them on how to live. Others were sung to warn people who do not respect the values and virtues of the community and teach people about good relationships. Therefore, these songs were not sung for the sake of it. No. they provided many teachings about the life of Omogusii. This book will be of great help to researchers from any ethnic community who want to seek the truth about the life and values of Omogusii. The songs are written in Ekegusii and translated into English. The author has taken time to record the songs in a Compact Disk, Chingero chi’Abagusii, so that the reader  can enjoy  listening to them.

This is a dictionary of more than 900 Ekegusii phrasal verbs drawn from diverse  conversational contexts. Phrasal verbs help a speaker to add flavor to his speech. These phrasal verbs will help us in enriching our speech.  Through phrasal verbs, adults could teach young people on the values of the society of  Omogusii in whose speech some things could not  be mentioned openly but could be clothed in some wit and wisdom concealed from the listener who must set out to seek the meaning of the phrasal verb. It was therefore, compulsory for listeners, especially children, to think deeply so as to make out  what was being said. To the reader of this book, I believe that you will enjoy reading these phrasal verbs and appreciate that our language, Ekegusii, is good and sweet. Not so?

Published by East African Educational Publishers, Ekegusii Nekiya meets the Competency Based Curriculum requirements (CBC -2018). This book emphasizes five areas of learning for the  learner: reading and co-operation, writing stories from pictures, holding dialogues, imagination and creativity.  The book is designed to engage  parent or guardian and the other members of society in the learner’s learning process.

Science has given us several explanations for how humans evolved from walking on four limbs to two feet. None, however, is as riveting as what Ngugi wa Thiong’o offers in The Upright Revolution, Or; Why Humans Walk Upright. Blending myth and folklore with an acute insight into the human psyche and politics, Ngugi conjures up a fantastic fable about how and why humans began to walk upright. It a story that will appeal to children and adults alike, containing a clear and important message: Life is connected.